Overview Adult Acquired Flatfoot (Posterior Tibial Tendon Dysfunction) is a painful, progressive deformity in adults. It results from a gradual stretch (attenuation) of the tibialis posterior tendon and the ligaments that support your foot?s arch. This stretching causes the tendon to lose strength and function. Many people have flat feet and do not experience pain. However, pain occurs with Adult Acquired Flatfoot because the tendons and ligaments have been torn. Once the vital ligaments and posterior tibial tendon are lost, there is no longer anything holding the arch of the foot in place. 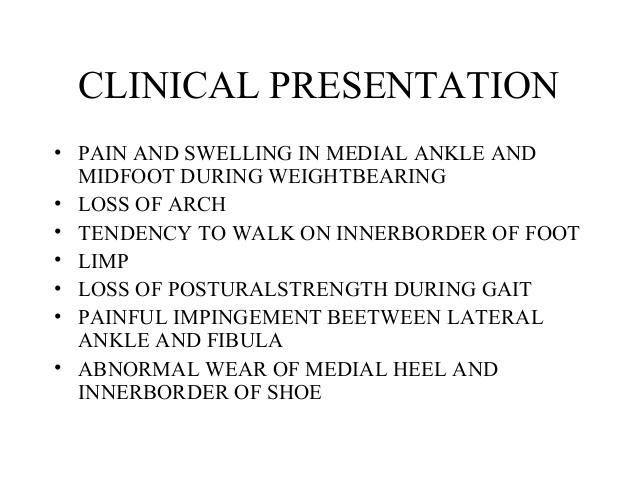 Causes As discussed above, many different problems can create a painful flatfoot. Damage to the posterior tibial tendon is the most common cause of AAFD. The posterior tibial tendon is one of the most important tendons of the leg. It starts at a muscle in the calf, travels down the inside of the lower leg and attaches to the bones on the inside of the foot. The main function of this tendon is to support the arch of your foot when you walk. If the tendon becomes inflamed or torn, the arch will slowly collapse. Women and people over 40 are more likely to develop problems with the posterior tibial tendon. Other risk factors include obesity, diabetes, and hypertension. Having flat feet since childhood increases the risk of developing a tear in the posterior tibial tendon. In addition, people who are involved in high impact sports, such as basketball, tennis, or soccer, may have tears of the tendon from repetitive use. Inflammatory arthritis, such as rheumatoid arthritis, can cause a painful flatfoot. This type of arthritis attacks not only the cartilage in the joints, but also the ligaments that support the foot. Inflammatory arthritis not only causes pain, but also causes the foot to change shape and become flat. The arthritis can affect the back of the foot or the middle of foot, both of which can result in a fallen arch. An injury to the tendons or ligaments in the foot can cause the joints to fall out of alignment. The ligaments support the bones and prevent them from moving. If the ligaments are torn, the foot will become flat and painful. This more commonly occurs in the middle of the foot (Lisfranc injury), but can also occur in the back of the foot. Injuries to tendons of the foot can occur either in one instance (traumatically) or with repeated use over time (overuse injury). Regardless of the cause, if tendon function is altered, the forces that are transmitted across joints in the foot are changed and this can lead to increased stress on joint cartilage and ligaments. In addition to tendon and ligament injuries, fractures and dislocations of the bones in the midfoot can also lead to a flatfoot deformity. People with diabetes or with nerve problems that limits normal feeling in the feet, can have collapse of the arch or of the entire foot. This type of arch collapse is typically more severe than that seen in patients with normal feeling in their feet. In addition to the ligaments not holding the bones in place, the bones themselves can sometimes fracture and disintegrate without the patient feeling any pain. This may result in a severely deformed foot that is very challenging to correct with surgery. Special shoes or braces are the best method for dealing with this problem. Symptoms The symptoms of PTTD may include pain, swelling, a flattening of the arch, and an inward rolling of the ankle. As the condition progresses, the symptoms will change. For example, when PTTD initially develops, there is pain on the inside of the foot and ankle (along the course of the tendon). In addition, the area may be red, warm, and swollen. Later, as the arch begins to flatten, there may still be pain on the inside of the foot and ankle. But at this point, the foot and toes begin to turn outward and the ankle rolls inward. As PTTD becomes more advanced, the arch flattens even more and the pain often shifts to the outside of the foot, below the ankle. The tendon has deteriorated considerably and arthritis often develops in the foot. In more severe cases, arthritis may also develop in the ankle. Diagnosis The adult acquired flatfoot, secondary to posterior tibial tendon dysfunction, is diagnosed in a number of ways with no single test proven to be totally reliable. The most accurate diagnosis is made by a skilled clinician utilizing observation and hands on evaluation of the foot and ankle. Observation of the foot in a walking examination is most reliable. The affected foot appears more pronated and deformed compared to the unaffected foot. Muscle testing will show a strength deficit. An easy test to perform in the office is the single foot raise. A patient is asked to step with full body weight on the symptomatic foot, keeping the unaffected foot off the ground. The patient is then instructed to "raise up on the tip toes" of the affected foot. If the posterior tibial tendon has been attenuated or ruptured, the patient will be unable to lift the heel off the floor and rise onto the toes. In less severe cases, the patient will be able to rise on the toes, but the heel will not be noted to invert as it normally does when we rise onto the toes. X-rays can be helpful but are not diagnostic of the adult acquired flatfoot. Both feet - the symptomatic and asymptomatic - will demonstrate a flatfoot deformity on x-ray. Careful observation may show a greater severity of deformity on the affected side. Non surgical Treatment Treatment depends very much upon a patient?s symptoms, functional goals, degree and specifics of deformity, and the presence of arthritis. Some patients get better without surgery. Rest and immobilization, orthotics, braces and physical therapy all may be appropriate. With early-stage disease that involves pain along the tendon, immobilization with a boot for a period of time can relieve stress on the tendon and reduce the inflammation and pain. Once these symptoms have resolved, patients are often transitioned into an orthotic that supports the inside aspect of the hindfoot. For patients with more significant deformity, a larger ankle brace may be necessary.

Surgical Treatment If initial conservative therapy of posterior tibial tendon insufficiency fails, surgical treatment is considered. Operative treatment of stage 1 disease involves release of the tendon sheath, tenosynovectomy, debridement of the tendon with excision of flap tears, and repair of longitudinal tears. A short-leg walking cast is worn for 3 weeks postoperatively. Teasdall and Johnson reported complete relief of pain in 74% of 14 patients undergoing this treatment regimen for stage 1 disease. Surgical debridement of tenosynovitis in early stages is believed to possibly prevent progression of disease to later stages of dysfunction.